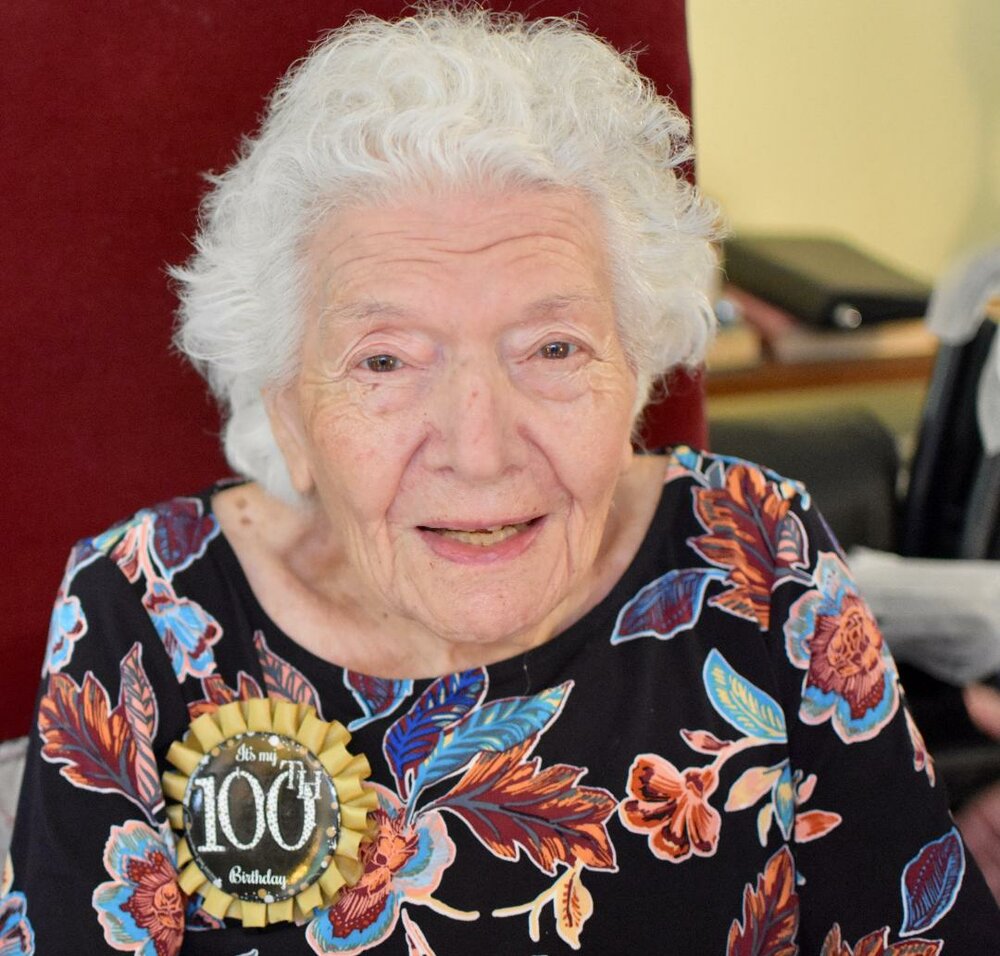 Evelyn Ruth Fowler, age 100 years and 6 months, died from natural causes, peacefully, at her home in Stamford, Connecticut on February 11, 2022. Evvy was an artist, a writer, a reader, a wit and a wordsmith, an engineer and inventor, an animal lover, a social activist, and one of the founders of the Society of Women Engineers.  In addition, she was a wife and mother, who raised four children in Stamford along with a succession of dogs and cats.

Evvy was born in Hartford on August 7, 1921, the second daughter of Joseph and Julia Vernick. She was the salutatorian of Hartford Public High School at the age of 16.  Julia wanted Evvy to remain in Connecticut and offered to buy her a car if Evvy would go to college locally to become a public school teacher.  But Evvy had no interest in teaching; she wanted to study art, so she enrolled at Pratt Institute in Brooklyn, New York.  After graduating from Pratt, she worked as a draftsperson for Hercules Electric and Manufacturing Co. in Brooklyn, a company doing work to support the war effort during the Second World War.  The President of Hercules was the late Alexander Fowler, an electrical engineer who was exempted from the draft on account of his technical expertise.  Evvy and Alex married in 1944.  Alex suggested that Evvy go back to school to study engineering.  She returned to Pratt to study chemical engineering after Columbia refused her admission because she was a woman, and Brooklyn Polytech told her they could not accommodate her because they had no women’s bathrooms.

Back at Pratt, Evvy met a small cadre of other women in engineering who were among the nascent core of the Society of Women Engineers.  Today, the SWE, now an international organization of more than 40,000 members, continues to promote and support women in the technical and engineering fields. Evvy went on to serve in various roles within the local and national chapters, and designed the original logo of the organization.

In the early 1950s, Evvy and Alex formed the American Actuator Corporation which developed industrial safety equipment.  Together, they developed electrical control systems to automate the process for bending sheet metal and held several patents for the machinery.

Evvy and Alex moved the business and their growing family to Stamford in 1952. While running the business and raising their four children, she found time to return to art, and took up painting, yoga, and swimming. An avid activist for equality, Evvy was an active member of the League of Women voters and Temple Sinai. She was on the Board of the Jewish Historical Society of Fairfield County, the Brandeis organization, and Learning in Retirement. She volunteered for Meals on Wheels, the Tandet Center, the Smith House, and various chamber music groups. Evvy became a vegetarian in the nineteen seventies following one of her children, and brought the New York Times crosswords to a new art form with her multicolored puzzles.

Evvy was thoughtful, talented, humble, and kind. She was adept at understanding the woes of others and always looked to contribute to her community. She was the matriarch of her family and will be sorely missed and always remembered.

A Memorial Tree was planted for Evelyn
We are deeply sorry for your loss ~ the staff at Sholom Chapel
Join in honoring their life - plant a memorial tree
Share Your Memory of
Evelyn
Upload Your Memory View All Memories
Be the first to upload a memory!
Share A Memory
Plant a Tree